'The beginning, the middle and the end, a personal register of Friday 5th December', by Mary Paterson 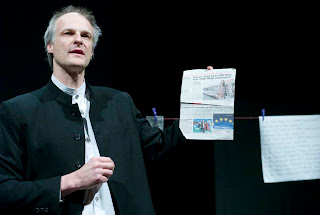 It begins with a phone conversation and ends with a handstand. In between, some cooking.

It begins with an introduction in English, a serious lecture, and a washing line of evidence. The voice of the former US Secretary of State, Colin Powell; the voice of Martha Rosler; the voice of a TV announcer. Fragments of speech torn out of context, like a word you say over and over again until it loses its meaning. He speaks in German, like a teacher, like a science teacher, like a mad scientist; he burns the washing line of reason, like a pre-emptive strike on his own narrative, like the tail light of a plane flying in darkness, like the fireworks from a bomb after it has exploded. Like the fireworks from the bombs in the war I did not march against. Like the march I did not go on, like the government that ignored the march I did not go on, like the dodgy dossier the government stole from someone’s PhD thesis. Like the slipperiness of knowledge, sliding out of my hands, sliding into someone else’s language. Like the names of the politicians in my country spoken in a foreign accent, laced into foreign syntax, making an audience of German speakers laugh. 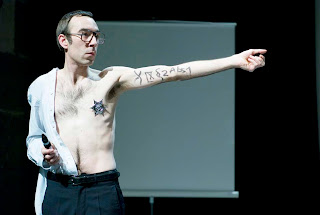 Wagner-Feigl-Forschung, ‘Die Enzyklopädie der Performancekunst’ at Performance Saga Festival - Bone 11, Schlachthaus Theater, Friday 5th December 2008.
Photograph (c) Martin Rindlisbacher
It ends with two men in suits, piercing their nipples with sheriffs’ badges, like performance art heroes, like performance art hero wannabes. A litany of names and pictures, like a slide lecture at university. Like the books I have read. Like all the books I have read. Mutilated bodies like the marks of the insane, like the vanguard of a performance praxis, like an attempt to say something. Protest like it means something. Protest on film, protest with music. Protests and artists on camera, in grainy photographs, bad quality documentation, inadequate documents, inadequate knowledge. Like the slipperiness of knowledge, sliding out of classification, written on a man’s arm in marker pen, written into nonsense, like the marks of the insane.

In between, a casting call for history. A video of the past, turning into the future. An audition for the past, to ensure the future. A video of my past, filmed at the gallery down the street from where I used to live, like going home. Like going back home, with my friends, and people who look like my friends, in the white walls of a gallery, in the safe arms of history, in thrall to an artist, in thrall to tradition, in thrall to the documentation, incapable of reproduction, incapable of reinvention, incapable of reimagining, in embarrassment, in having missed out, in wishing I was there, wishing it was my idea, wishing I had been part of the crowd when it happened, and not six months too late, in the gallery bookshop, reading the catalogue, having missed the exhibition, having misunderstood, having let it slip out of my fingers and into other people’s past.

It ends with two men in suits, with a choreographed stage presence. They exercise the power of preparation, the surety of practice. Of a practice. A set of movements, staged like pop stars, staged like presidents.

In between, twenty-six women in aprons. They giggle like school girls. They follow the instructions of a pioneer, the authority of a matriarch, stabbing the empty air in a white walled, whitewashed version of 1975.

It begins with anticipation at what is to come and ends with confusion about what has happened. In between, some laughs.

It begins with yesterday and ends with tomorrow. In between, some notes to work on.

It begins with Peter Vittali’s performance, ‘The Second Person’, and ends with Wagner-Feigl-Forschung performing, ‘Die Enzyklopädie der Performancekunst’. In between, Martha Rosler’s video work-in-progress ‘Semiotics of the Kitchen: An Audition’.
Posted by theron at 08:05