'Watching the Audience', by Mary Paterson 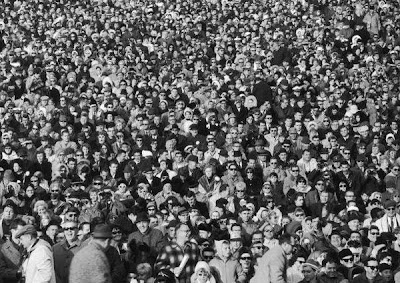 Last night, the audience at the Schlachthaus Theater was choreographed as much as the performances. The theatre played host to three live performances and two videos, which meant the audience was ushered between the theatre and the bar three times before the evening was out; and the building was packed, with people crowding the stairs and craning their necks to see what was going on. Altogether this fostered a collective atmosphere, which is why it seemed strange that the last piece, an intimate kissing performance by Irene Loughlin and Jorge Manuel de Leon, provoked an angry reaction from one viewer, which seemed to polarise opinion.

For her lecture, ‘Remains to Be Seen’, Carolee Schneemann invited three translators to sit at the side of the stage. She took us on a tour of the iconography of her own practice, delivered in English, and the translators rang a bell when they came across a word they thought the audience would not understand. These ‘difficult’ words form a kind of iconography of their own – ‘exuberant’, ‘bewildered’, ‘terminal’ – which could give an alternative reading of Schneemanns’s practice. But the words also acted like a bridge between the expectant audience and the famous artist, quite apart from the function of translation itself. Interrupting the flow of Schneemann’s speech, and prompting her to expand on certain points, the translators’ semi-formal setup allowed Schneemann to take detours from her narrative. Absorbing the interruptions, Schneemann danced round the playful story of her iconographic progress – in which childhood drawings predict the motifs of her later work – in the same way as she danced her introduction onto the stage. And, by disrupting the narrative of her lecture format, these interruptions also reinforced Schneemann’s artistic reputation. The audience would expect nothing less from an artist who describes a recent piece, ‘SNAFU’, as ‘a completely mysterious work; I have no idea what it’s about.’

In ‘use me’, Gaspard Buma appeared to reach out to the audience even more. After a short power point presentation that described his body as a gendered and relational object, Buma invited the audience to use his hands, and just his hands, for any sexual purpose. Meanwhile, he played a kind of cyber music with his head, which was wired to a computer so that he generated synthetic sounds by moving it up and down and from side to side. The effect was two fold. The music gave Buma a kind of agency while members of the audience manipulated his hands in a string of almost sexual ways – sucking his fingers, unbuttoning his trousers or, in one case, turning his back to the audience to feel a woman’s body, almost hidden from view. But the responsiveness of the music – which seemed to reflect Buma’s anxiety or embarrassment at any one point – also showed you can’t dissect a living body. His head and his hands were all part of that gendered and relational male.

And yet there was something restrictive about this forced spontaneity. In his lecture, Buma described how men are associated with dominance and said he’d like to refute this by being used. But his techno-body distanced and protected him from real manipulation. The concept echoes the famous ‘Rhythm 0’ performance by Marina Abramovic (1974), in which she invited the audience to touch her body with instruments of pleasure and pain; the audience mostly chose pain. Perhaps Buma was protected from this danger by his gender, but he also tried to avoid it by striving for technological disembodiment: a separation of mind and body fashioned not just from his wired headset but also the pseudo-professional presentation that justified the intellectual basis of his approach. For every step the audience took towards the performer in ‘use me’, the performer took a techno-step away. And this mismatch between what Buma said he wanted to do and what ended up happening maintained a separation between audience and performer, despite the openness of the initiation.

‘Use me’ re-appraised the tools of previous performance works –like Abramovic’s – in the context of a different kind of body and a different cultural moment. Like the two videos which punctuated the live work, for which the audience crushed into the tiny bar like commuters travelling through the morning rush hour, it seemed to be educated by a tradition of body-related performance that raised smiles of familiarity from the artworld crowd last night. Coming right after Schneemann’s lecture, Ursula Martinez’s film ‘Hanky Panky’ (filmed at the Just for Laughs Festival, Montreal, 2006) could have been a delayed punchline to the history Schneemann told. Schneemann bemoaned the fact that Interior Scroll (1975), a performance in which she removed a manifesto from her vagina, is so well known it eclipses her other work; in a glitzy theatre, Martinez performed a magic trick which culminated in her pulling a handkerchief from her vagina, as if Schneemann’s iconic work had been absorbed into the repertoire for cabaret.

After we had watched Kate McIntosh’s video ‘Instinct’ (2003), in which a grubby showgirl describes her ‘talent’ for failure, in the terms of a starlet describing her propensity for success, the audience filed back into the theatre one last time, to see Loughlin and de Leon perform ‘Kiss.’ This time we were invited to share the stage itself, sitting cross legged or lying on the floor. The performers were already there, and naked. They moved towards each other with a veil, and began to kiss through it. Shaking, and covered in the stains of other allegiances – the marks left by clothes, scars and tattoos – the two performers built an intimate atmosphere from their vulnerability as individuals. Sometime after they had started, and after they had symbolically sewn themselves together with a needle and thread, one member of the audience asked if ‘we’ should ‘stop them.’ A spell was broken. The performers froze. For the first time I realised the intimacy I was imagining was simply my own; it might not be shared with the strangers around me. This act of mutiny from the audience provoked a (mostly good natured) argument, and some people left the room. It was as if the members of the crowd that had cheerfully bustled along so far, suddenly wondered if they had anything in common. But the woman who asked the question also said, ‘aren’t we allowed to participate?’ She was questioning the reverent, passive silence of the audience as much as the nature of the performance itself. And in this way, she was responding to the atmosphere of the evening as a whole, in which the audience had been invited (more or less successfully) to take part, and to exercise their knowledge and interest in what was being shown. The comment may have made us disintegrate from an audience to a collection of individuals, but it did so in the terms of a community sculpted from the evening’s performances themselves.
Posted by Mary Paterson at 07:31