'Endstation More Wrong: The “Bewilderung” in Performance with Carolee Schneemann' by Almut Rembges

Last night, Carolee Schneemann was not alone on stage with her lecture performance “Remains to Be Seen”. From studying her work and meeting her personally, I had got the impression so far, that she has this affinity to things and situations looking slightly wrong. And she is a perfectionist in devising these kinds of situations, where some kind of insufficiency is not wrong anymore.

To ensure that all of the sophisticated passages in her speech would arrive safely at the audience, she invited three translators to join her on stage: Peter Vittali, Florian Feigl and myself, we were instructed to assist the audience, in case they would have difficulties in understanding some vocabulary. So we were supposed to stop her speech with a bell and translate quickly whenever we got the impression that this would be necessary.

So we listened carefully and tried to do our job as expected. There was that “bewildering of the cat on that endless staircase” (Bewilderung), which was wrong, but somehow we had to insist on this translation because the “Erstaunen” of a vocabulary proof person in the audience, who happened to be the artistic director of the theater, was just not enough.

And when you're out there
Without care,
Yeah, I was out of touch
But it wasn't because I didn't know enough
I just knew too much

Anyway, there were some more wrong things, which were difficult to bring into one single translation version, whithout paying the price of ignoring the potential of their ambiguities. Are “more wrong things“ just wronger? Even wronger than anything else? Or is it about a bigger quantity of wrong things?

The whole thing got slightly out of control, SNAFU-ised, so to speak, and I am almost sure that it was destined to come out that way. So we ended up being trapped in some kind of comfortable awkward wrongish intellectual exchange with/between Carolee and the audience. The trap was a buffering zone between Carolee and the audience – deconstructing that fourth wall between audience and stage. Con-fusion = Melting with each other.

Let me use a bungee-thought and say something crazy: yesterday, the things were meant to be said in a way, that the border between right and wrong was being absorbed (“Up To And Including The Limits”).To be translated: “Es kann nicht davon die Rede sein, dass wir jemals an einem einzig entgültigen semantischen Endpunkt ankommen”. There is no semantic Endstation in ambiguity. Maybe that’s the con-fusing (bewildering) thing about it. Is that true, Carolee? * 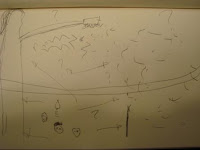 Sketch of the performance, 'Remains to Be Seen', Carolee Schneemann, by Almut Rembges

[1] All of the lines in italic are taken from the song “Crazy”, by Gnarls Barkley, which we heard with the dance at the beginning of the perfomance.
Posted by Mary Paterson at 08:07