'Iconographic Mystery: A conversation with Carolee Schneemann after her performance,' by Dagmar Reichert

The day after her performance “Remains to be seen” in Bern, 4.12.08, I was given the opportunity to talk with Carolee Schneemann. This is an extract of a longer conversation. Schneemann began the performance by defining “Remains” in English and German. Two objects of the “Mysteries of Iconography” were presented: a coil of rope and a wooden stick. 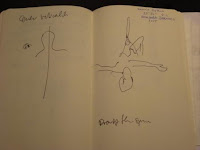 Sketch of images from 'Remains to Be Seen' by Carolee Schneemann, by Chris Regn

Dagmar Reichert (D): Yesterday in your performance you described some continuous traces that run through your work.
Carolee Schneemann (C): It takes so many years to begin to see there is a recurrence of material, of thoughts, and then there is also the offering – that’s part of the mystery - of how these things come to be realized at all. So for last night, the only things that I knew I had, were the sequences of power point images and the bell – brought from home – I did not know how I would use it. And the music by Gnarls Barkley, “Crazy”. And then yesterday I found a bungee cord behind the stage, so that could represent the cord, the line, but then I’d need a stick and I found a stick in the broom closet. This is when the spirit of the work is in the whole fabric and begins to give you these objects, or a word or a thought. It is outside of me, but it is what I need. And then I feel that what I am searching for is speaking back, becomes magnetic. My work also offers me a history in time – not just what I pay attention to, but that things in the world begin to pay attention to me.

D: In your performance I had the impression there might be a tension between on the one hand the impulses that, at a certain time, your cultural environment would take from you (maybe your society at the time was ripe for a new attitude of women to their body), and on the other hand the works and the directions you had to follow for yourself…?
C: Well there was always resistance to everything I did. When I started my performative lecture with the early paintings and called them “my ineptitudes”, it’s because the culture was denigrating, ignoring, trying to limit my sense of authority or potentiality. And I don’t know where I really found that sense of authority or potentiality. It starts in the need to make these drawings, which were made when I was 4 years old and became predictions of recurring elements: the rope or framing line, the broken vertical of stairs. But all along the way the world around me was saying you cannot do that.
D: You could serve as a snowplough for new things…
C: A Schneeplough! Well now the appreciation is remarkable. I am still astonished when there is as much shared insight, that is wonderful.
D: The tension I felt yesterday was when you talked about the reception of your work “Interior Scroll”. As if you meant: I don’t want to be just that, there are other things to my artistic work, things that “remain to be seen”.
C: You know, I never thought I was working for society. I always thought I have to see something. And then it occurred to me that this would be very … potentially, of use to the culture. With “Fuses” I did not know what I was going to find. I made an attempt to visualize the intensity of heterosexual connection – because there was no precedent around me. And I did not know if I was doing anything of any value at all. But the strength of my work is really in the structure and in the sense of how materials or visual elements have to be structured in time so that there is an aspect of rhythm and momentum, duration. Intensive editing is part of it, rigour, and research into history. That is what really interests me and I think it is what has sustained what I do.

D: When you talked about an “iconographic mystery” in your work last night, does this have to do with you trying to understand what the central question to your life could be?
C: No. I am not trying to understand. I am trying to see. I am trying to see connections and relationships. It is more visual than conceptual. Because if I ask a question I am looking for an answer, but if I want to make an observation I invite connection. So it is not predictive. I don’t know what I am going to find. So the whole presentation last night, the rope and the stick, that just became clear to me very recently when I went through my old childhood drawings.
D: And it is abstract enough to mean many things? So the broken stick may be stairs, a broken phallus, a weapon, or – as you said - the energy flow through the body, or…
C: Exactly. The correlatives of material. And then they introduce a deeper meaning. And that is not one that I expected. I love to be surprised. – And then there are other aspects that have to do with the paranormal and the animal – the recurrence of the cat, I just recently found this amazing, the drawing of the exuberant cat I showed yesterday. 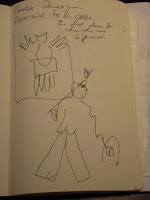 Sketch of the exuberant cat, from 'Remains to Be Seen' by Carolee Schneemann, by Chris Regn

D: What are for you, at the moment, the most burning open questions?
C: Loneliness. Loneliness in juxtaposition to all this public receptivity. When I now go home I am all alone. I don’t call home, there is nobody there to call home to. For most of my life I always had a partner.
D: And can that be transferred into powerful work?
C: No. Not for me. It is just a condition of age. Especially for heterosexual women. The men all die, or suddenly realize that they are really gay, or they renew themselves with someone very young like your best friend’s daughter.
D: Did you never have the wish to have children?
C: Never. I raised my brother and sister when my mother was very sick, that was enough.

D: If so many people now just address you in terms of this very small portion of your work, do they not try to turn you into a monument while you are still very much alive? That could make you lonely too.
C: You know, in a subtle way it is very sexist, because it reduces the full scope of the work to a very feminine, physicalized aspect of it. It has become clear to me that this is still part of an unconscious patriarchal mold. The tough stuff, the technologies, projection systems, the full environments that I have made: those are being ignored, so the culture can concentrate on the naked female.
D: So you nourished these traditional images without wanting it.
C: Yes.
D: But it also may have to do with the logic of media and the fast stereotyped images it produces. It turns you into something like a label, not a human being any more.
C: It is a label. And that is also part of an economic way of organizing information. If you are collecting an artist’s works you want that it “looks like” that specific artist, it “looks like” a Cindy Sherman,…, so variations and permutations defeat a project. And that might also be why I almost never sell any work whatsoever. I only have work in one museum in the United States. So much of my work is in the storage shed in the country. Birds eat it, they take the parts they like, and mice … Do you know the perfect way to dissolve epoxy-resin?
D: No.
C: It is mouse urine. If the mouse pees on epoxy, it will dissolve (laughs).

D: What where your thoughts after your performance last night?
C: The audience was wonderful. What an incredible audience! They were funny, responsive, smart. They were right where I was. When I came out on stage and – by coincidence – the music I had playing in a loop had just stopped and was about to begin, and because I knew it I started doing the steps, and people in the audience were laughing: “she knows this already”. Yes, it was vibrant. And the translators were just adorable. The usual struggle that we don’t speak the same language and nuances get lost… became a fragmented interchange and it was nicely in proportion. And just this sense of family here and the organizers’ attention to details is really wonderful.
Posted by Mary Paterson at 08:09