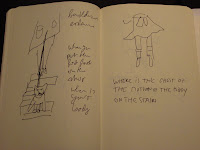 Sketch of images from Carolee Schneemann, 'Remains to Be Seen', by Chris Regn

Carolee Schneemann Remains to be seen
She came onto the stage like Kylie Minogue
She started dancing before the music started and was exactly in rythm
She brought a broken and fixed broom and a bungeerope
She used the broom like a stick in a revue and swung the rope very sophisticatedly
She represented the broken vertical and the potential torture with those two elements
She drew an exhuberant cat when she was 4 yeears old
She drew her brother throwing a toy
Her first deconstruction was a drawing with verticals, kind of skyscrapers with bunny extensions, broken narratives
She got interested in where the body is when you put the first foot on the stair
Where is the ghost of the motion of the body on the stairs
There was a cat in the drawing
Not on the one with her brother on the staircase with cute socks
In the next painting 3 cats that went unseen by her professors by the presence of a male nude
She showed the broken staicase in a painting that solved the painting’s problems with the verticality,
She demonstrated the fractured verticality with the broken broomstick
She spoke about Lou Andreas Salome in connection to Freud, Rilke
She showed a cutout, dissappeared painting 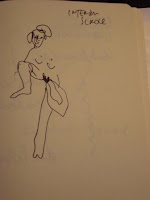 Sketch of images from Carolee Schneemann, 'Remains to Be Seen', by Chris Regn

Now she started to talk about the rope
About "Snows", a kinetic Theatre where always somebody got the instruction from the audience to be symbolically hanged
There is Shigeko Kubota
She talked about light penetrating water as waterneedle
And about water reflecting light as waterlight
Ist about above and below and she saw it in Venice with the bridges
She made artists walk and hang on ropes above the audience space
She included a plumline in a piece about separation
She is interested in center verticality
She starts to hang on a rope
She draws into the room on a bungee rope
She shows a drawing that was before an "interior scroll"
The scroll is clearly connected to the staircase
She feels connected with the interior scroll photos to Meret Oppenheim represented by the Fur Cup
What remains to be seen
She got instructed for a work about her dead friends within dreams
She was instructed to make a work about her dead friends through a dream
Hannah Wilke said: Dont put my image next to Paul
An agressive male voice told her in one of the instruction dreams:
Six rotations per minute
And she found motors for her ropes in front of the projections of photographs
It started with the death of her cat that she photographed
Everything that was killed around her house for a work called: more wrong things
It was an electronical spidernetwork with hung monitors
She made a completely mysterious work that she really likes called SNAFU -Situation Normal All Fucked Up
White coats, motors in front of projections of a horserace but upwards
She enlarged falling bodies for a photowork that was not very poular 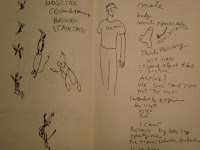 Sketch of images from Gaspard Buma, 'use me', by Chris Regn

Use me by Gaspard Buma
Male
Body
Sexual representation
Identification
Positive
Self image
Sexual object is not bad
If active
Using
But not be used
I can’t
Because my body is not totally mine
I live here
I can’t give you my full body
But I can give you my hands
I have too many cables
Gaspard did act musically composing sounds from his computer with keymovements and added singing. So we had kind of a musical going on. To me he appeared with the sound almost like a machine for gambling, reacting to every thing that came from the audience
The audience got excited with the call to go to Gaspard on stage and use his hands in a sexual way. So he already made us think about sexual things with him. He did interpretate passivity in a strange way! He is not a good girl!
In a tantra workshop my teacher said: you can also do it with your neighbour, you just have to have esoteric music and to say that it is yoga.
The part with the music was really getting all my attention.

Irene Loughlin initiated a performance with Jorge Manuel de Leon refering to the Carolee Schneemann film Fuses on the Representation of Sex with her Parter Tennant.
The two performers we saw last night met in Guatemala, communicated via Internet: they did not know each other very well, they wanted us close, with them on stage and they stood on both sides, naked, just a veilish textile linen-like thing on the floor between them. She stood left, he right and then they walked towards each other meeting through, under, with this veil that also got a lot of symbolic importance, becoming a marriage tool and a hole, torn up by the male performer and it was also the representation of lost virginity. They both also used a needle and red thread to connect their hearts by sewing the skin on their chests together. The thread was removed by them and they went on kissing in different positions, coming closer to the floor. In the end, she was sitting on him.
Some people in the audience interpreted, that the piece was about a couple making love and intervened instead of going out. One woman wanted to stop them and started to talk about democracy. It was loud and excited, they couldn’t accept the couple. It felt strange to think about democracy seeing a couple. To me it seems to indicate the uncomfortable feeling like if I had to witness an arranged marriage .The couple couldn’t cope, their bodies couldn’t accept that.
Posted by Mary Paterson at 07:42