Humour normally comes at someone’s expense: the clown slips on a banana skin, and I laugh because it didn’t happen to me. But the humour in the concert by Alison Knowles and Die Maulwerker, which rippled across the performances from beginning to end, did not ridicule anyone’s point of view. Instead, it arose from a contrast of forms and expectations that was both contained in its references and comprehensive in its relations. As a result, the concert shaped a gentle kind of humour that bonded the audience inside the theatre but also connected each audience member to the world outside. 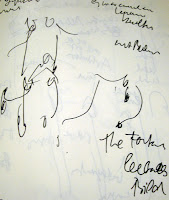 Notes from the performance, by Chris Regn

Each piece in the concert was structured around the contrast between an arbitrary or mechanical score, and its considered, human interpretation. In ‘Silk Thread Song’ (Song #2 from ‘Three Songs’ by Alsion Knowles, 1972; Maulwerker version, 2008), for example, Die Maulwerker read a screen print that was made entirely by machine; the sliding harmony of the group’s collective sound and the intensity of their reading, however, infused the score with (human) life. Because the silk screen is not an interpretation in itself (in the way that a composed piece of music is already an interpretation) and cannot refer to external events, Die Maulwerker’s recital was goverened by rules contained within the performance. And yet, greeting their tools with a sense of discovery – whether they were household objects or musical instruments – the performers worked through a kind of intuition. They made music as if music is something everyone can make: this was no virtuouso display of musical genius, but an empathic and affecting navigation of possible sounds. Sitting in the audience, I could imagine being a musician myself, and I could understand the self-contained terms in which this music was being made.

But while this contrast between a limited frame and an expansive methodology underpinned the work, it also threw it off balance. In ‘zunge losen’ (Christian Kesten, 1999/ 2002), three performers sat at the front of the stage shoulder to shoulder and, shivering with adult concentration, stuck their tongues out like naughty children. In ‘Fountain’ (Steffi Weismann, 2008), the performers poured water carefully between each other in baroque poses – until they drank the water and left the stage. In each performance, the combination of seriousness and playfulness was both contained and universal, but it was also funny. The question is, who were we laughing at?

In the case of the clown and the banana skin, the clown becomes the person the audience doesn’t want to be: humour is our excuse from embarrassment, and our entry to a group of people who share a common relief at not being the clown. But in the case of Alison Knowles and Die Maulwerker, the performers reached out to become just like us. Here, the audience’s laughter was inclusive, not exclusive. It recognised the curiosity of other human beings and marked entry to a group with no outside. Just like the actions of the performers themselves, in fact, the laughter seemed like an instinctive reponse to the inscrutable terms of engagement that governed each piece. We didn’t laugh at ‘zunge losen’ because the performers broke the rules of normal, serious behaviour, but because we empathised with the desire to explore the rules at all. If the concert was a stream of actions which stood outside of convention, as if they were pre- or post- culture, perhaps this laughter was the audience’s empathic reply: an instinctive sound borne from a room full of people, with nothing in common except the moment being shared.